Caramel coloring is not an ingredient that should be taken lightly or ingested freely. It currently resides on a list of dangerous chemicals in the state of California specifically for its cancer causing properties. Consumer Reports created quite a stir when they reported earlier this year that caramel coloring causes cancer.

Caramel coloring is a chemical named 4-methylimidazole which is referred to as 4-MeI. It can be listed on a label by any of those three names, caramel coloring sounds the most life food therefor is the most frequently used name.

Do not be misled, caramel coloring is not food. At best, it is food-ish, if it is indeed sourced as a byproduct from cooking food. Caramel coloring in soda is not sourced from food however.

When Consumer Reports tested the cans off the store shelf they found results that exceeded the allotment of caramel coloring used without a warning label.

The FDA says, “4-methylimidazole (4-MEI) is a chemical compound that is not directly added to food; rather it is formed as a byproduct in some foods and beverages during the normal cooking process. For example, 4-MEI may form when coffee beans are roasted and when meats are roasted or grilled. 4-MEI also forms as a trace impurity during the manufacturing of certain types of caramel coloring (known as Class III and Class IV caramel coloring) that are used to color cola-type beverages and other foods.”

Pepsi responded to an ABC News request regarding caramel coloring saying they are, “In compliance with the law, you would have to drink much more of this soda than people consume to cause a problem.”

The FDA reported that tests in mice which grew tumors equated to a human drinking thousands of cans of soda a day to cause a problem.

CNN reported, “The Food and Drug Administration does not set federal limits on 4-MeI in food.”

Killer Colas, The Hard Truth About Soft Drinks says caramel coloring is, “Created by the reaction of sugar with both ammonium and sulfite compounds, this particular type of caramel coloring is technically called Caramel IV. The process of manufacturing Caramel IV results in by-products such as 2-methylimidazone and 40methylimidazole, both of which have demonstrated an association with lung, liver, and thyroid tumors in laboratory rice and mice.”

Nancy Snyderman, MD says in Medical Myths That Can Kill You the real concern with soda is the acid in them that can cause tooth decay. Dr. Snyderman says, “You can minimize the decay-producing effects of these drinks by cutting back on or limiting them, or by chugging them rather than sipping.”

Dr. Snyderman does mention the Framingham Study, an ongoing study in a city outside of Boston which started in 1948 using about 6,000 men and women, A group was observed over 4 years regarding soda consumption.  She says, “Researchers found that adults who drink one or more sodas a day – diet or regular – had about a 50 to 60 percent higher risk of metabolic syndrome, a cluster of risk factors such as excessive fat around the waist, low levels of “good” cholesterol, high blood pressure, and other symptoms.”

Caramel Coloring Dangers, a report, says, “Mixing of carmel (sic) color with ammonia and sulfites at high temperatures can create carcinogenic chemicals.” This is the process taken when manufacturing sodas.

In August of 2014 the FDA reported, “FDA is currently reviewing all available data on the safety of 4-MEI and is reassessing potential consumer exposure to 4-MEI from the use of Class III and Class IV caramel coloring in food products. This safety analysis will help FDA determine what, if any, regulatory action needs to be taken.”

A better alternative would be to drink home brewed probiotic sodas. Click here to view a healthy example.

Making your own at home is not hard, takes up very little time and if done correctly with the right flavoring will not stick around, and may even cause some elbow throwing. Click here to lean how to make your own at home. 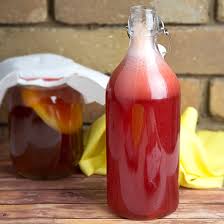 A SCOBY, which begins the brewing process, can be acquired by putting a query on social media as well as garage sale type media sites. You can make your own at home by taking a store bought bottle of kombucha, adding it to sweet tea (equal amounts of the store bought or just a bit more using half a cup of sugar) then let the mix sit on the counter covered for a week or two. The pancake that forms on top is your SCOBY. Or you can find them by clicking here.