Getting My Amalgam Fillings Removed

My life changed when I had my amalgam fillings removed by a holistic dentist. It changed my world.

Two years ago I had a tooth that was causing me pain and went to my regular dentist who said the amalgam filling needed replaced. They only last so long, and it was time. When I was  9 years old and got my first cavity, I was told they last 15 years. I thought I beat the clock, I was 42.

The pain was building for a while but oil pulling solved the pain, yet the oil pulling was turning into a 4 time a day habit.

At the time, I had no idea the mercury vapor was causing damage. It wasn’t until later that I learned the vapor with amalgams is increased with chewing gum, drinking, brushing your tongue on top of the amalgam, eating or brushing your teeth. I had Leaky Gut at the time this amalgam was removed, so I’m not sure if that exacerbated my mercury poisoning or if it was just another rung in the ladder.

(Side note: the mercury vapor coming off this amalgam filling pictured is from a tooth extracted over 15 years prior to the picture. In addition, I have read the air toxicity over Japan is the highest in mercury toxicity due to all the amalgam fillings used and the cremation of bodies. I can no longer find the source of this article but I do remember reading it and I do know Japan is very attentive to negative publicity, removing it diligently). 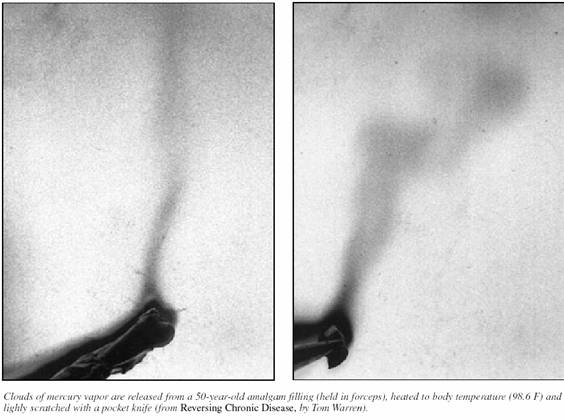 Regardless, over the next year I gained 30 pounds, eating a strict Full Gaps diet – so strict it made other people uncomfortable. I brewed all my own kefir and yogurt from grass-fed pastured cows who ate organic feed while getting milked. I exercised at least 3 times a week burning anywhere from 1500 calories to 3500 calories a time – and I still gained 30 pounds. I blame it on the metals.

There were 5 amalgams total in my mouth which had all been there 25-35 years respectfully. The first was removed by my regular dentist, where I swallowed a great deal of amalgam as well as the harmful mercury vapor. Coupled with the many years of breathing in mercury vapors and leaching, there was no mistake, I had mercury poisoning.

The last, and most troubling effect from the amalgams was the most remarkable. I began to lose my mind. This wasn’t normal where did I put my keys or what did I walk in this room for? type of losing my mind. This was beyond the coping skills of making lists because I’ll forget what to pick up at the grocery or putting my car keys in the refrigerator with my water bottle so I don’t forget my water bottle at a friend’s house – this was blank, empty, void, deficient to the point of absence losing my mind. There were times when I talked, the words that came out of my mouth were completely different that what was going on I my head. So if I noticed it happening I remained silent. If I read out loud the words would be in my brain but were jumbled coming out of my mouth. It felt like my mouth and brain were often working independently, like there was no communication at all. It grew more and more frequent that I lost words. I couldn’t remember simple words as I talked, every day words like notebook or spaghetti squash. Words and thoughts were totally gone – like an empty hollow space was taking over my brain.

There was just nothing there no matter how hard I tried. I was 42 years old.

One local holistic dentist existed in Chattanooga, Dr. Bob Gallien, DDS, of Smiles of Chattanooga. As it turned out most dental insurance plans cover $1000 towards dental work a year, mine included. So I used that cushion, along with a few thousand dollars of our own that we didn’t have, to get the remaining four amalgams removed.

(Side note: every amalgam filling I had removed had a cavity or two underneath it. Each tooth was also cracked or fully fractured).

I love going to dentist. I love having my teeth cleaned. I love the feeling of a fresh start in my mouth, like a spring cleaning for my face. That said getting my amalgams removed wasn’t easy. It was over 4 hours of non-stop work in my mouth. However Dr. Gallien’s team made me as comfortable as humanly possible. He used a dental dam to contain the amalgam but also didn’t allow saliva to accumulate in the back of my throat. Other safety precautions were made to prevent further amalgam poisoning. I had sound deadening headphones and watched 4 episodes of Monk on Netflix while he worked. I had a comfy fluffy blanket – it was literally the closest thing to sitting on my couch as they could make it.

I was told my metals would shift when I had the amalgams removed.

I would love to hear other stories of shifting metals but my story was… well, odd. While driving home from getting my amalgams removed the world became a slide  show. Literally the trees, cars and buildings began moving like slides shifting screens. My car was steady and I was safe but the world around me was changing slides for a long 4-6 seconds. I spoke audibly to myself in the car, “Woe…” followed by a long period of my lower jar dropped open, catching flies, like a child seeing a room full of Christmas presents.

The same thing happened the next morning while meeting a friend to go for a run. I was trapped in the middle of a slide show.

During that time I had on and off pain from a swollen disk in my back. The pain would manifest as a sharp pain on the inside of my left knee. One week after amalgam removal the pain on the inside of my knee escalated to severe pain, ironically at the same time I needed to pick up an unaccompanied minor at the airport – where I set off the metal detector. The lady waved her wand over me, just in the area of the pain. When I turned around so she could wave my posterior side I saw the monitor flashing a red notice with a yellow warning alert right at my source of pain, the inside of the left knee. I was wearing shorts that day. Every bit of that zone was visible to the wanding officer.

After setting off the metal detector I sat on a bench, so my son could put his shoes on, and watched everyone else coming through the inspection station. It was packed with people dispersed through six stations of the Atlanta airport, where only one other lady was pulled aside and wanded. She was wanded over her hands, covered in rings.

It’s been just over half a year since the amalgams were removed. I have been faithfully chelating with vitamin C, chlorella (click here to see the one I useote, the FDA makes me say this when I link a product: #ad), Spirulina (this one, again FDA required: #ad) and GAPS (FDA required #ad) phase two for over 7 months now. I have only lost 8 pounds while eating nothing but different GAPS vegetable soups for the 7 months) and my body is adjusting much like a stepping down plateau shelf. Phase two is very telling as it is the detox phase of GAPS. I feel more now than I did at the beginning and my digestion has improved tremendously as well as the mental clarity. In fact my mental clarity is near what it was when I was in college.

If anyone out there in cyber-land has experienced shifting metals please post your experience below.