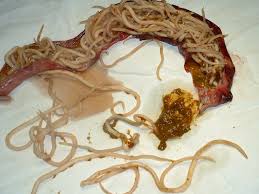 A woman felt symptoms of parasite infection and practiced some methods to kill the offenders then pulled an 18 inch worm from her privates, described Paul Chek author of Healing Fungal and Parasite Infections. She took the worm in a jar to the doctor where they tested her, the lab test showed negative, no parasite found. They retested three times, three times it came back negative. The worm identified was a rare vaginal escarus worm infection. 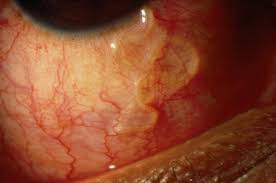 Through improper diet, “You become a walking molotov cocktail of bug food, you’re just walking around begging bugs to eat you. Diet is extremely important as you don’t want to feed the bugs, you want to starve them out and eliminate them,” says Chek. Overeating is the perfect environment for parasitic infestation. “If a person’s bringing in food in excess the body can not break it down and eliminate it. If you’re eating more flesh foods than you need you attract parasites. If you overeat sugars you will attract worms that are sugar lovers.”

Chek says the optimum diet for controlling parasitic overgrowth is through eating an anti-fungal diet of anti-parasitic foods: meats, veggies and fermented foods. He emphasizes DO NOT overeat.

Several natural remedies can help eradicate parasitic overgrowth including  bentonite clay which works as an absorptive and an adsorptive eliminator. Chek says clay, “Acts like a sponge absorbing things with great power. It also has an electromagnetic property that makes it attractive to heavy metals and other toxins in the body due to covalent bonding, sharing electron rings. It can pull toxins out of the body. It can absorb them. It can act like mud in the intestinal tract and pick up ameoba parasites.”

Cayenne peppers and honey mixed together are powerful killers. The honey attracts the parasites, luring them in, while the cayenne pepper kills them. Ranked as one of The Top Books Worth Reading, Cayenne Pepper, by Sharon Daniels explains how this versatile spice kills parasites at the same time it regulates your system helping flush out the offenders. “If you master only one herb in your life, master cayenne pepper. It is more powerful than any other,” says Dr. Richard Schulze, Medical Herbalist from herbdoc.com.

Frozen cod liver oil capsules taken on an empty stomach with lots of water is one of your strongest weapons, according to Paul Chek. Freezing the capsules slows down the dissolving time allowing it to enter the small intestines when it releases the cod liver oil. This enables the oil to coat the parasites and worms like a blanket and suffocates them. Ginger, garlic, turmeric and wormwood kill and remove parasites and fungus infections. Wormwood and black walnut together are credited as being one of the most powerful remedies.

Chek is considered the leading expert on natural methods for eradicating the 400-1000 different parasites and funguses. He says, “Sometimes it’s viable to look at the symptoms and treat as there is a parasite or fungus. Some of the tests are not very accurate.”

Food grade diatemaceous earth (FDGE), fossilized remains of diatoms, is another powerhouse just like clay, is made from earth and chelates heavy metals in addition to eradicating parasites. If you overdose on earth the result is constipation. FGDE can potentially rob you of nutrition as it can absorb nutrients. For this reason take FGDE on an empty stomach first thing in the morning and late at night. “Diatomaceous earth contains heavy metals as part of its mineral content, but it also contains the natural antidote, selenium, which allows otherwise accumulative heavy metals to be flushed from the body. Therefore, it is not really a health concern despite the presence of aluminum and lead,” says Healthy Life.

Paul Chek’s book How to Eat Move and Be Healthy discusses health  in a modern fashion, dropping low fat food trends and dependence on prescriptions like cement shoes. Chek says 4.5 billion people have worms. Grains that sit in silos get damp and grow fungus. It is not approved at that point for human consumption so it is fed to livestock. The problem then is it’s been fed to livestock. This is directly linked to parasitic over growth in humans. Chek says die off symptoms often present themselves in the same manner as the symptoms only amplified. For example if you’re suffering from headaches due to parasites and fungal overgrowth when you experience die off the headaches will be worse. For more information watch Paul’s video blog here: http://www.youtube.com/watch?v=kcpTaSkqFHw&list=PLZupSfb-NVbqx1nnoh5pni1_irYyfVcs1   checkdvds.com to order Healing Fungal and Parasite Infections fungus dvds http://www.undergroundhealth.com/eliminating-the-stomach-parsites-you-almost-certainly-have/.