Advertisements are supposed to bring attention to the positive aspects of the products they are depicting. Advertisers will push their product as hard as they can to accomplish one job- increased sales. Webster’s Dictionary defines advertising as, “To call public attention to, especially by emphasizing desirable qualities, so as to arouse a desire to buy or patronize.” The Bureau of Consumer Protection says, “Under the law, claims in advertisements must be truthful, cannot be deceptive or unfair, and must be evidence-based.” However, a company can advertise however they choose until they are sued or they receive a cease and desist order.

Through time, by observing advertising decade by decade, it is easy to see how advertising has tried to entice us to purchase product. It’s also clear how products themselves have changed through the course of time. It is up to us to use the brain the good Lord gave us and determine what is a real claim and what is not.

However when we look through history we can see how far we have come away from basic food knowledge and nutrition and into packaged food ease.

These ads from 1886-1899 clearly pass themselves off as headache medicine and exhaustion relief. Proof of this claim settled upon a basic fact, the drink did contain medicinal aspects from the kola nut and the extract of cocoa leaves. In 1902 it was found the mere trace content of cocaine was 1/400 of a grain of cocaine per ounce of syrup.

Other advertisements at the time showed women were trying to gain weight, in fact, women who were plump were considered admirably healthy and full of life. Ladies wore corsets to enhance their shape and men of status had collars and cuffs starched so heavily they were waterproof. Other advertisements that filled the papers were for those corsets, bar soaps, a small spattering of pre-made flour mixes and butchers who would process the whole animal. The most frequently seen advertisements were for bicycles.

Jumping ahead to the 1920s presented a whole different era of advertisements.

Oatmeal was known to bulk up children by making them husky. This was known as healthy. This was in contrast to an emaciated slight child. This healthy thickness was not blubber fat like we see today. Today’s oats are a completely different product. Today oats are used to fatten farm animals for slaughter.

The shapely thrilled lady helps advertise yeast tablets made from brewers ale. She says, “Since I gained 10 pounds this new easy way I have all the dates I want.” She goes on to say, “Now there’s no need to be ‘skinny’ and friendless even if you never could gain and ounce before.” That’s where my eyebrows hit my hairline but it gets better as she says, “Not only are thousands quickly gaining beauty bringing pounds, but also clear skin, freedom from indigestion, and constipation, new pep.”

This wasn’t the norm as another advertisement for La-Mar Reducing Soap also adorned the pages. Yes, it’s true, a soap that claimed it would, “Reduce any part of the body desired without affecting other parts. No dieting or exercising.”

Campbell’s Tomato Soup® was advertised prominently and frequently like this ad saying, “To National Geographic readers with their keen interest in the whole wide world and how its people live, here is an interesting fact: Campbell’s Tomato Soup is known, liked and eaten in every land under the sun. The famous Red-and-White label greets the tourist in every clime. French Chefs. Celebrated American kitchens. International fame. Only a product of strict and uniform quality could win such applause.” 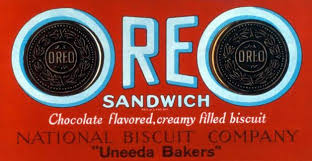 Bicycle ads were fading while car ads were filling the pages from multiple companies, not just Ford. Buick, Lincoln, Studebaker and Daimler were all competing for ad space. Cigarette advertisements were more and more abundant giving the car ads a race for quantity. More variety was seen in the pages including shoes, chewing gum, colas, firearms, all steel refrigerators and the most recent cooking gadgets. Easy no-cook prepackaged treats were copying the vibrant color filled ads of Coca Cola® dwarfing other advertisements. 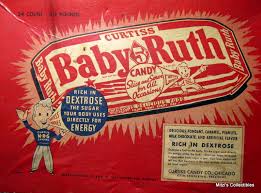 Curtiss Baby Ruth 5 cent candy, 24 count, 3 1/2 pounds, is entertaining as it proclaims, “Slice and serve for all occasions!” Mascot character male cheerleader Curtiss, with his blue sweater bellows from his bullhorn, “Rich in DEXTROSE the sugar your body uses directly for energy.”

In the 1950s grocery stores had been open for ten years and advertisements in the newspapers and magazines were loaded with packaged foods that can “make lives easier for the smart housewife.” This advertisement from 1950 read, “It has complete protein in its lean, energy in its fat and ‘back home’ flavor in its eating.” This canned bacon advertised the ease and health of bacon in a can. The instructions read boil it in water for three minutes, drain and eat.

Cola companies said babies would be healthier by starting them on cola earlier. This ad reads, 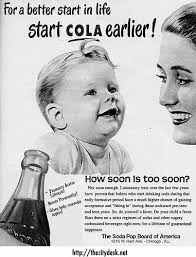 “Laboratory tests over the last few years have proven that babies who start drinking soda during that early formative period have a much higher chance of gaining acceptance and ‘fitting in’ during those awkward pre-teen and teen years. So do yourself a favor. Do your child a favor. Start them on a strict regime of sodas and other sugar carbonated beverages right now for a lifetime of guaranteed happiness.”