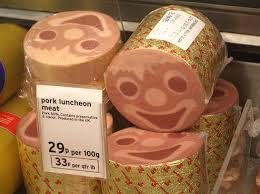 Meat glue, a product linked to ADHD behaviors, dymensia and other diseases, is known to many chefs and meat processors as a common ingredient used to take lesser cuts of meats and glue them together for resale as a higher cut of meat. Briefly put, Transglutaminase, or meat glue, bonds any food containing protein. It is currently used in meats (including chicken and beef), fish, dairy products and bakery items.

Currently there is a part per million (ppm) allowance for transglutaminase for processed cheese, hard cheese, cream cheese, yogurt, frozen desserts, vegetable protein dishes and meat substitutes. This is in addition to meat and seafood items.

Correspondence with the Office of Premarket Approval at the FDA says the approved amount of transglutaminase for “Eaters Only” was categorized for the sum total consumption as 12 mg/person/day (12 milligrams per person per day).

The process of using meat glue is simple: take otherwise discarded meat pieces, coat them with meat glue, mix together well, roll the meat product in a sheet of cling wrap, refrigerate overnight. The end result is a new cut of meat made from lesser cuts of meat that is unrecognizable as an impostor. When you pull on the meat, it does not separate and responds as a normal piece of muscle tissue. When cut, the meat responds exactly like a piece of meat not using meat glue. In fact, the meat glued product looks, feels, responds, cooks and tastes exactly like the cut of meat it is pretending to be – the difference goes unnoticed even to professional chefs.

Transglutaminase (TG) is legally referred to as a protein cross-linking agent.

Cooking Issues from the International Culinary Center describes meat glue as, “A naturally occurring enzyme in plants, animals, and bacteria.” They refer to the use of this product as normal just as any enzyme in cooking is normal, like starches to brew beer or rennet to make cheese.

C & P Additives, producer of transglutaminase, lists on their website the benefits of using TSG in food products as: 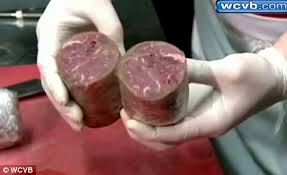 In the ’60s transglutaminase was extracted from the livers of guinea pigs. In 1989, Ajinomoto, a Japanese company famous for producing MSG, took transglutaminase through further testing and commercialized transglutaminase for human consumption as Activa. Today transglutaminase comes from pig or cow blood but can also be plant based. It can be purchased through Amazon by anyone and added to any food. Click here to learn more.

Cookingissues.com, a site for chefs, says, “Some studies have shown that stomach enzymes have difficulty breaking down proteins after they have been bonded by TG.”

They go on to say, “When TG-ases are improperly regulated in the body, they are associated with plaques in the brains of Alzheimer’s, Parkinson’s, and Huntington’s patients as well as in the development of cataracts in the eyes, arteriosclerosis (hardening of the arteries), various skin disorders, etc.”

Interestingly, when the meat glue is bonding it produces a molecule of ammonia.

This ammonia is seen in the cooking world as an aid. Different forms of transglutaminase have an unrefrigerated shelf life. The rule or thumb for chefs for testing to see if your meat glue is still good to use is to glue a few pieces of meat together and smell the meat while it is still moist. If the meat smells like a wet wool sweater or wet dog, it is still good. This smell comes from the ammonia.

The New York State Department of Health in a document describing ammonia under the subheading of Chemical Terrorism says, “Ammonia is also produced naturally from decomposition of organic matter, including plants, animals and animal wastes.”

Chefs are encouraged by Cookingissues.com to use plastic wrap as, “The plastic wrap technique is great because there are no rules regulating its use, and it is simple, fast and cheap; foods can be cooked in water directly in the plastic wrap.”

Meat glue cooking kits can be bought through mail order from modernistpantry.com for under $40 and contain enough meat glue to adhere 36-40 pounds of meat.

Transglutaminase is also used as a tenderizer.

Ideas In Food a book about transglutaminase with recipes says, “Efficiency can be improved with the addition of gelatin, caseinate, potassium chloride, and fiber, and these ingredients are sometimes added to transglutaminase blends to facilitate the bonding process. Salt and phosphates also increase the effectiveness of transglutaminase by increasing the availability of salt-soluble proteins.”

The addition of caseinate is highly concerning as many people today suffer from casein intolerance, celiac patients and autistic children are primary victims. The difficultly in avoiding casein is navigable through the elimination of milk products such as cheese, yogurt, ice cream or yogurt. When products such as medicine gel caps are added to the product list containing casein the puzzle gets more complicated. Now, knowing meat and fish also contain casein the puzzle is not only mind boggling it’s disheartening. 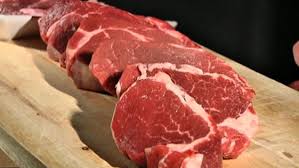 For mothers, such as myself, who strive to feed their kids clean food in an effort to control ADHD, autism and other gut issues, information like this is vital. When meat is not meat, but instead it is meat-ish, behavior problems are abundant.

If you know anyone with food allergies or sensitivities share this post for them to see. It could help.