ADHD Considered a Fake Disease Something Is Wrong With My Son

“He can’t eat shrimp any more.” My husband’s words were matter of fact.

Food elimination is not a strange mistress in this house, she’s a full fledged guest! We take out more “ingredients” than I thought possible seven years ago in an effort to eliminate behavior problems. I say “ingredients” because I don’t really consider carrageenan to be an ingredient. It’s a thickener, an emulsifier, added to products, but in reality it’s used in the science industry to inflame test animals so they can then test anti-inflammatory drugs. I also don’t consider aspartame an ingredient as it’s not food, it’s the fecal matter of e-coli.

Outside of these food-ish ingredients we have eliminated, we also removed things with unlisted ingredients like American Cheese for the unlisted aluminum. If an ingredient is considered industry standard they don’t need to list it as an ingredient. Other non-food ingredients are potassium sorbate, sodium sorbate or sorbic acid, sodium propionate or calcium propionate. They aren’t really food, they deter mold.

However, when he said shrimp my head took a snap. That’s real food! That’s a God made food for us to eat, not a man made food-ish item. But the male he was referring to wasn’t my son, it wasn’t the canary-in-the-coal mine that lives in my house. It was a co-worker. You see when my husband begins to talk to someone it doesn’t take long before the freaks we have become surfaces. He pulls out a snack of homemade fruit leather made from the wild and outrageous ingredient of only fruit, eyes pop over his shoulder. When he opens his lunch made from heirloom garden vegetables and grass fed meat wrapped up tight in a collard green leaf and tied with a green onion, noses get closer. Truth be told, they call him the alchemist’s husband at work. As a writer and author of four books, a cum laude graduate from the third best journalism school in the nation, I did what any normal wife would do when her husband came home and told her, “They call me the alchemist’s husband.”

I pranced on over to the computer.

Not knowing what the heck an alchemist was and ready to throw elbows at his coworker I consulted my best friend, Webster. He said an alchemist was someone with the power to “transform something common into something special.” So I stood a little taller and sashayed with a little more sway. I know, I know, my great-grandma was laughing in her grave somewhere saying, uh, yeah, it’s just called cooking, honey!

So when this co-worker began telling my husband a story on shrimp it was nothing new. We get foodie stories all the time. It was just confirmation that our food isn’t really food anymore. It’s a mere form of food, altered to present herself at the ball, injected with liquids to hold her youthful figure long past her expiration date and painted with makeup to hold her good looks.

Turns out the guy can’t eat shrimp any more because he ate so much shrimp for so long that he knows the taste of shrimp as well as the taste of not-shrimp. He described the method of hauling in shrimp, the process of the boats, the handling and cooking of shrimp and the smell that gets masked by a bleach bath from the shrimp sitting on boats too long. He can taste the bleach bath covering up the shrimp taste. So in addition to your shrimp you’re eating bleach. 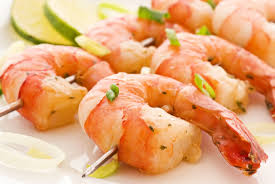 When my eyebrows came down from my hairline I put shrimp into the same mental box as so many other foods. There’s food and there’s food-ish. We eat salad but we don’t eat pre-cut salad sold in bags as we can taste the chemicals sprayed on the lettuce to prevent browning. We eat eggs but we don’t eat 99 cent eggs, or even free range eggs from omnivorous chickens fed vegetarian feed who stand shoulder to shoulder on concrete floors. We eat eggs from bug eating sun soaking chickens.

Now the studies begin once again. The phone calls have to be made. Companies need to be consulted because we need to find out what ingredients are or are not in our food. I can honestly say from one mama to another, it shouldn’t take this much research to simply eat food!